I can’t believe it is a year since I started on mepolizumab (mepo) a monoclonal anti body treatment to suppress my eosinophils in a bid to help my asthma. The big question is as it helped? 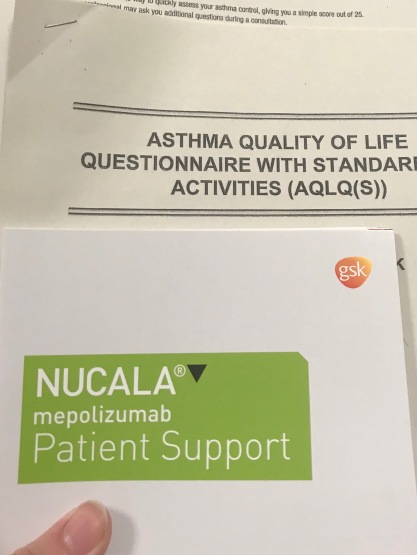 I am not sure. My consultant seems to think it has and I am to continue on it. My eosinophils have dropped dramatically however I am still on the same maintenance prednisolone dose and we have not been able to reduce it down and I am no longer working just now. I was in clinic last month speaking to my consultant as I was having second thoughts about staying on mepolizumab because I cant see a huge amount of improvement but he feels it is worth staying on it and I have been approved to stay on it for the following reasons:

Looking at the reasons my consultant listed I really cannot complain and can see that the mepo has had an impact. It has not had the wonder drug impact that I hoped for and that I have read many have had but I am alive and have a great team behind me so really need to be thankful.

I did some work a good number of years ago for Astra Zeneca where I met some other asthma patients. One young lady I met had their life totally transformed by Xolair going form being intubated numbers times, not being able to work and very disabled by their asthma to having a full time job and minimal asthma issues. I think deep down part of me was desperate to have this effect. I remember thinking after I was told I would start mepo that I might be able to get back to the gym, start running again and playing lacrosse and golf but that has not been the case which is a bit disappointing for me but I was told not to get my hopes up too much.

Even though the mepo has not been the wonder drug that was going to transform my life I am so grateful to my consultant for being willing to try it and keeping me on it. Apart for the hopes of it transforming my life I was worried about the side effects it might have. On the whole I have really not had any significant side effects. I have been finding I get a bit of a local reaction for about 48-72 hours post injection where the skin is red and hot. Initially when I first started getting the injection I did get a really bad headache, backache and just a general feeling of being unwell. After about the 3rd injection this went away. I have found that if I am a bit under the weather in the days leading up to getting the mepo then I tend to get more side effects in terms of headache etc but nothing that has been so bad it is not worth getting the injection especially as I am not having to get up and work set hours etc.

I have come across different stories on social media about peoples experience of biologics but one thing I have found is the number of people weighing up the travel for these treatments. When you asthma gets to the severe end of the spectrum most are referred on to a tertiary centre where their care is managed and their local hospital is there as a support team but do not take the overall control of your management. There are not many tertiary centres so there is often a lot of travel involved. I am lucky that Id not have a huge distance to travel but I think even if I did I wouldn’t mind because I know the team are doing it in my best interests and the least I can do is travel although it may be more difficult when you factor in that you do have severe asthma which is already controlling your life but if there is a chance that this is going to help then the travel is worth it!!

Another discussion I had with my consultant was about new biologics that are coming out. He is hopeful that dupilumab may have its use altered and some asthmatics may qualify for it. Just now it is only used in adult eczema in the UK but in the States there have been people on it who have aspirin sensitive asthma which is what I have except that I am anaphylactic to aspirin and salicylic acid so fingers crossed this gets a green light at some point as we both think this might work well for me.

The use of these monoclonal anti body drugs is dependent on such specific criteria and the patient needs to meet them and the consultant needs to be able to provide evidence for it before you get the green light. Because of this many are not getting the opportunity to try it and see if it has an effect.

For me I did not match the criteria for blood eosinophils but my consultant was able to argue the case. He was able to show that the prednisolone I am on will be surpassing eosinophil production and if i was not on it then my count would be elevated but it is too dangerous to take me off them or down a significant amount just to get the blood result. I would say it is worth asking your consultant to see if there is potentially a way to justify why you need to try this treatment and then be approved for it. It is so frustrating that a drug you are trying to get off is the main factor to many not meeting the criteria, but if you came off it then it is so dangerous as your asthma can go so out of control without it. I can see why they have strict criteria because the drugs are really expensive as they are such targeted drugs but in time they will drop in price and hopefully the criteria for the drugs will also be more flexible too.

Overall I am glad I have had the chance to try mepolizumab and being able to stay on it. If I had not changed consultants I doubt I would even be considered for it which is a scary prospect as I have no idea where I would be with my health.

If anyone has questions about monoclonal antibody treatment please ask!!

5 thoughts on “A year on monoclonal antibody treatment” 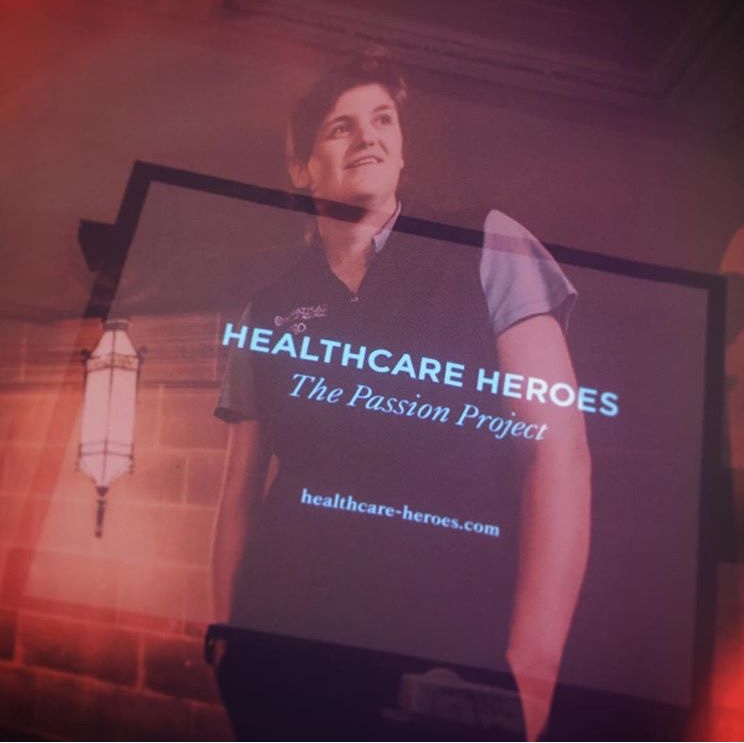