I cannot count the number of posts I have done about smoking, passive smoking, the smoking ban and how it effects my lungs and the lungs of many others like me.

It really hit me the other day after parking my car in the carpark at work and walking the 200m to get into the hospital how many people I had to pass firstly at the pedestrian crossing, then the pavement to get to the narrow walkway to get inside the doors and then the narrow walkway itself and the doors was just like running a gauntlet and taking your life into your hands.

24….thats how many people (patients) I had to pass who were smoking on the short 200m walk. It is sickening to have so many people.

Im not sure those who are smoking really understand just what the effect is on other people as there is no way to liken it to anything else. I can never explain the mental and physical negative effects that it has on me (and Im sure I am not alone in those thoughts).

The fear I have is unreal. I am terrified that this is what may happen AGAIN 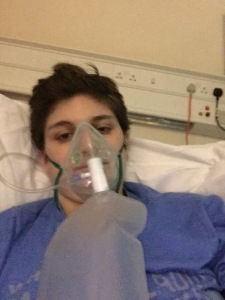 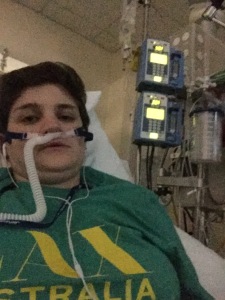 Both these photos are from the effects of passive smoke which hit me when I was no expecting it. The first photo was just before going to ICU after spending about 8 hours in resus, getting stable, moved to assessment unit to then get bad and need ICU. The second was taken in ICU after someone smoking below my open window and me having an asthma attack.

The fear of having asthma attacks is like no other. There are theories that you can make someone run up stairs with a close peg on their nose and breathe through a skinny straw to simulate what it is like to not be able to breathe but they can always take the peg off and open their mouth.

In the photos above I was so tired I just wanted to give up and stop fighting but you cant. If you give up you risk being intubated or dying. This is the reality. So many people die from asthma attacks that come from triggers that are out with their control. It feels like you are being punished for something you didnt do. It is more than just the attack itself but the consequences that go with it- being off work, missing holidays, medication that causes side effects, family being so worried about you, family needing to look after you to name a few.

Before the ban on smoking there were visible smoking shelters and it never used to be a risk to just get from your car into a building. I am not saying that everyone used the smoking shelter but a majority did and the risk was greatly reduced which matters so much.

My biggest fear in life is having an asthma attack, so imagine being faced with your biggest fear on a daily basis multiple times. It seriously makes me wonder if working is really worth the risk. I don’t know who to speak to about it. I blogged about it, tweeted about it, spoken to my union and will just about tell anyone who will listen. I love my job but it is getting to the point of weighing up risk and reward especially with being on a new treatment. Can I really justify the expense this new treatment will cost the NHS vs exposing myself to a major trigger everyday and risk attacks which could jeopardise the success of the trial.

Anyone who can suggest or make a difference to the smoking obstacle course I face please let me know (I have tried using other entrances but this is an issue at other ones too). as I am desperate now.

2 thoughts on “Passive smoking……what does it mean???”