The last few weeks have been tough, far tougher than I ever thought and looking back on them I am glad to have come through them with only requiring review from ICU and not needing to go there.

My chest and asthma control really hasn’t been great mainly due a combination of different things which eventually hit a head my body had had enough. Pushing myself on and on, not taking the time to sit a recover and put myself first was the main thing. I do struggle doing that often especially with work because we are so busy and I want to do my best for my patients as I know what it feels like to be left and things not being done- I hate that feeling and would never want my patients to feel it either so I kept going getting things done often finishing late, working through lunch and not looking after me. I need to look at this in future as there are others in the team who can take the slack and some of the load off me. I need to make sure I ask for it. It came to a head when I went into work and sounded like I had swallowed a whistle and was told to go home which I did. 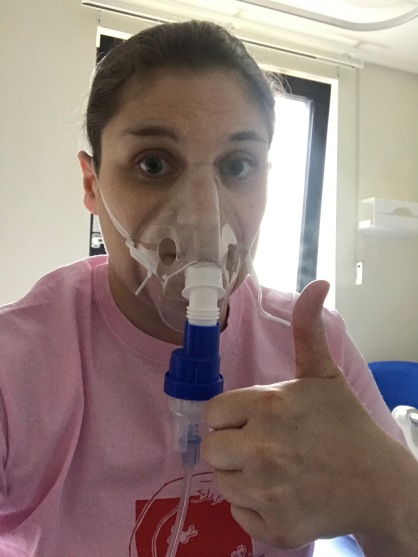 I went in to hospital via out of hours as I didnt think my breathing was too horrific which is why I went via out of hours and not straight to A&E. However I managed to freak them all out in out of hours as I was a little blue around the mouth but also my heart rate was up at 180 so I was sent straight to the resus room at the Western General where I would stay for the next 4 hours until stable enough to go to the ward. It wasn’t until I go into hospital that I realised how unwell I actually was and how hard I was working to keep myself on and even keel. It was like I knew I was in a safe area so I could stop and be looked after. The advantage of being at the Western is that if you go in with a respiratory issue the respiratory team will come and see you and treat you in the acute attack. I find this good as they know exactly what to do and how to get on top of the attack quickly. We managed to correct the bronchoconstriction fairly quickly with IV magnesium, hydrocortisone, adrenaline and aminophylline and continuous nebulisers plus oxygen however my high heart rate was becoming a concern as it wasn’t coming down and despite being given lots of fluids. We soon fund out why. My theophylline level was 40- ridiculously high and my potassium was 1.8 seriously low both of which can lead to tachycardia. I had to have my aminophylline stopped because the level was so high and the only thing to do is wait for it to drop itself but at least we found the reason for my fast heart rate. I was pretty concerned and confused as to why it was so high but this we also found out was most likely because of the antibiotics I had recently been taking.

During the admission I was so grateful to the nurses and Dr’s who looked after me. It was a long admission with several attempts and fails at getting access and bloods, weaning of steroids and then increasing steroids and a lot of frustration as to why I just wasn’t getting better. The care I received in this respiratory ward was second to none. I could not have asked for better. The staff were all willing to let me self manage but if I needed help they would be there compared with the respiratory ward in the other hospital where you feel like you are being a pain if you ask for anything and they just kick you home whenever they feel. 2 weeks was a long time but they really made sure I was feeling better and made sure my chest was better and explained and worked with me to self manage to the best I could.

This admission was also very eye opening as it made me realise just how bad my care has become and how much I am doing myself in order to just get myself through. I have been frustrated with my respiratory team for a good while now as felt they don’t look at you as a whole person rather they just want you to be on the least amount of medication possible no matter how awful you feel. I wasn’t prepared to do this as I love my job and am quite a social person so would prefer to need that little bit more medication if it meant I had some quality of life so for a long time I have been muddling through myself trying to find the balance and always worrying what if I did something wrong and end up in hospital and end up being told off for increasing my steroids etc. I had quite a few bad experiences when looking for help from the resp team regarding various things such as when I was exposed to shingles etc. I ended up feeling quite scared to ask them for any advice or help. A few other scary things came out of this admission as well which I didnt know and that was that I have had abnormal ECG’s for the past year- more abnormal than before which no one told me about. As a result of all of this I have decided to cut all ties with my current respiratory team and move all my care to the Western. They may specialise more in CF than they do brittle asthma but I have confidence in them, the team there is willing to help and I think I can work with them to get my health back. I was thinking back and the last time I really understood my asthma and had a good treatment plan was with my old consultant at the Western before he retired, so maybe moving everything back here and although it will be a different consultant it might just get me that stability again.

There is still going to be the time that I see my old team if I am admitted via A&E but they won’t have control of my care and would only ever need to treat the acute setting.

I know that my health is not going to change overnight and in fact this admission is going to take some getting over and some work to get back on my feet but I can do this positivity knowing that my care is changing.