It has been quite a year this year. So much has happened!!!

January- I started working in the Community Dialysis Team and it has been fantastic. It has not gone quite as planned. I had hoped that moving to CDT would mean my health would be much better and I would be able to get my old life back. This has not quite bent he case. I have had to reduce my hours to part time which has made a big difference. January also was the turning point where I realised that I would not be able to get back playing lacrosse or running the half marathon in May. This photo is from my birthday with my nephew!

February- I was admitted to hospital. It was what I thought at the time one of my most terrifying hospital admissions. A nurse on one of the wards I am admitted to regularly told me I knew what it was like to be dealing with asthma and I shouldn’t be scared. I was terrified and exhausted and told be told this was enough to tip me over the edge. I never thought I would experience this especially from people who knew me and know my asthma. I ended up discharging myself. How can you stay somewhere when you have to hear stuff like this. 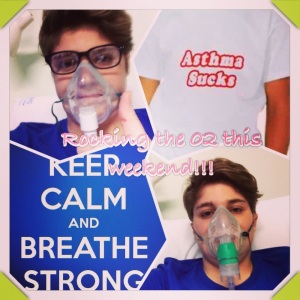 March- this was a great month. I went Canada. A massive turing point. 10 years since my asthma really started going down hill which was precipitated  by pneumonia I got when I was out in Canada ski instructing. I had not been out in Canada since then. Emotionally it was really tough going back somewhere which turned my life around. I was going back there on my own. I was staying with family which did make it easier but it did also show just how much my life has changed. 10 years ago I was able to  ski a whole day and not need to take breaks or finish after a few hours!!!But it was fantastic to go back there and in a way face my demons I left there. I did though miss my nephews first birthday as I was flying. 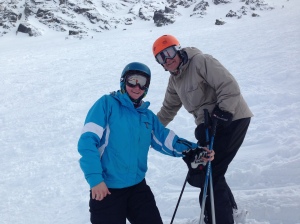 I also got to catch up with an old school friend while I was in Canada. Its strange when we were at school together we never really got on that well. But Angela came over to stay with a mutual friend Jenni and we grew to be great friends drink that year and when I was over in Canada I had to go see her and we had a great time!! It was just a pity that it was such a short time I had to see her!!

April- I went to the respiratory nurse specialist clinic for the first time. I did think this would be a turning point in my asthma but it turns out it wasn’t. April really was essentially a non eventful month. I did have a few asthma attacks. had to miss some golf but all in all it went by with no specific events I can recall!

May- this was a massive month and one I will remember for years to come. Infact it was 2 days which I will remember as they did change my life. It started on the 5th where posted a video for world asthma day which is on the 6th. It was seen by Asthma UK and I was asked to do an interview for the Guardian about asthma and Dr’s not listening to their patients. I was playing golf with my step dad and step brother when a photographer followed us round th golf course for pictures to go in the newspaper. It was published on the 6th which was also my step dads 60th birthday. That morning I got a phone call to do a phone interview and speak on the radio as the National Review of Asthma Deaths had been released. As a result of the interview I was asked to attend parliament for the launch of the new research centre of excellence for Asthma. Here I met some fantastic people and was asked if I wanted to become involved in the PPI section of this centre and I said yes. The rest you can read in my blog.

June- I had an appointment with Cardiology as was having problems with my heart. It all turned out to be a side effect of my asthma meds. June was a stressful month as my Granny got taken ill and we thought the worse. She was very poorly and we thought the worst. Remarkably she is still here and doing not to badly. My step sister also got married down in Wales. It was a fantastic day and she had a lovely day!

July- I had a week away playing golf in the Highland Open. It is a fantastic week. I love it. Getting to see friends and have a bit of competition. The weather was amazing. I again qualified for the scratch but got knocked out in the quarter final! It was a good rest.

August- I had some wonderful trips to different golf courses in Scotland such as Kingsbarns which was rather eventful- thunder and lightening!!! I also thought this was the month that I would manage to taper my prednisilone down to eventually get off it but as the year moved on this was not the case. It was nice to think though that I might have got off it!!

September- a family holiday to Portugal!! The usual golf holiday with my Dad and Stepmum but this time my brother, his fiancé and my nephew came too. It was a lovely break away!! This holiday however was also point in which I would go from working full time to working part time. On a more positive note though I did see as it turns out my new consultant. I had originally gone to him for a second opinion and Im not sure how it happened but it seems now he is my consultant and my old consultant is no longer my consultant.

October- In february I thought I had the worst hospital experience I would ever have. How wrong I was. October was the worst experience I have ever had and hope no one ever has a similar experience. I did make a blog post about it and it was protected with a password but now I have taken the password off it. I want all to read it and understand that this must never happen. It makes me realise that no wonder the statistics about about asthma are so bad if this is how asthma is treated.

November- I had a the experience of a life time. I went to Oxford with AUKCAR for the academic launch. I was able to speak to some fantastic people and have made so many contacts as a result of it. I have got a few projects to be involved with which is fantastic as now it means that rather than fundraising for asthma and to try and make a change by giving money I can now help make a change to asthma by helping with research. This is why May was such a big month for me. Had I not done that video for World Asthma Day I would not be involved with AUKCAR and I love every minute of it.

December- has been more of a reflective month for me. There has not been much going on. Mainly I have been gearing up for Christmas and trying to keep myself well. I also started a new project where I have asked various people I know if they would like to write a guest blog about their experience with asthma. I have a few more to post which will be done in the new year.

2014 has been a mixed year. A year of highs and lows, ups and downs. I have learned a lot over the year about myself and my asthma. By being involved in AUKCAR it has made me change my attitude towards how I approach my own health. I used to try and avoid going to hospital, or increasing my medication and often would do things because I wanted to even if I was not well enough. However now I think I take my condition more seriously. I also know that being involved in AUKCAR with one of their aims to be to improve self management and reduce hospital admissions I need to act responsibly and take action when I start feeling unwell following my own self management plan. Medication adherence and compliance is one of the big issues and I would be contradicting the ethos of AUKCAR if I did not act as I do now. I used to act totally the opposite and would do all I could not to increase medication and often to y detriment.

I am looking forward to 2015 and all it brings.