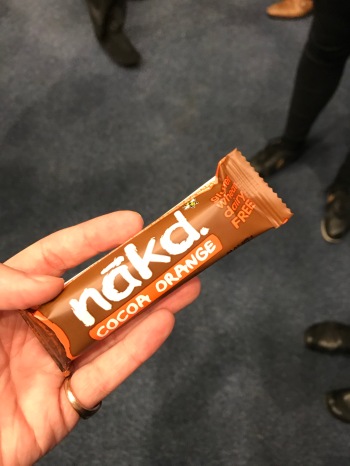 You may think why is there a picture opening this blog post. Believe it or not for this allergy sufferer (that’s me!!!)  I was given this as an allergy friendly alternative to the cake which was provided for the coffee break at a conference. I had gone over to ask if the cake was nut free but they couldn’t not guarantee this so they had provided Nakd bars as alternative. All I can say is thank goodness I did not take them at their word and also that I can read as the staple for these bars is nuts!!!

Since my asthma has become more unstable and through a series of complex testing which did result in going to intensive care once we discovered the aspirin allergy I have was not going to be reversed with desensitisation. In fact since that desensitisation I have found I have become even more sensitive to it and now have to be salicylate free (a compound of aspirin that naturally occurs in just about everything from fruit and veg to toothpaste). My main issues though are nuts, tomatoes, herbs, spices and chilli type stuff.

I guess I have had a bit of a bad run of luck recently when at events. 4 different speaking events in a row I was left hungry. Being hungry is not too much of a problem although one person I was in London with did complain that I was getting very grumpy as it was pushing 12 hours since I had breakfast and I think she was desperate to get food in me!!

When I am invited to speak at events one of the first things I check is how long the event is and if there are meals or a buffet etc. As I know allergies are a total faff, it drives me round the bend I am more than happy to bring my own food with me, especially if it is a buffet then it doesn’t look as strange when I pull out my own packed piece- I get strange looks if its a sit down meal and do this!!! If meals are provided I will always tell them in advance about my allergies and often ask what they have planned and I will say yes or no. I appear as a fussy eater but actually the one and only food I do not like and can almost say I hate is the potato (thankfully I am allergic to potato skin due to salicylic acid in it).

Recently  however at these 4 events which were all held by different companies and services I think I have had the worst experience possible. It has highlighted as well how little anyone actually understands food and food allergies- particularly those serving food.

The second of the 4 was in London and just after the teenager died from eating a sandwich from Pret and had an anaphylactic reaction. I would have thought there would be a heightened awareness of food and allergies particularly when they have been pre-warned.

A common theme that I have found is that those serving the food have no idea what it is they are serving. I will always ask what is in something when given it unless I have cooked it or have seen it being cooked. On these occasions no one could tell me what was in the dish they were serving, but they also were not for volunteering to find out what was in the dish which really irked me. I did say I was asking due to allergy which is why I needed to know but they seemed like robots just dishing plates out and not actually caring about what they are doing. I liken it to my job. If I am asked to give something to a patient I will ask what it is- I am talking about their meals not drugs here as can not imagine putting something down in front of someone not knowing what it was.

The major major thing though that is not excusable on any level and no matter how anyone tries to wiggle out of it there is no excuse possible especially in the food industry and it has happened at 3 out of the 4 events I was at. I will break it down into different parts first the menu, then the alternatives, then the guess work.

The Menu. Why now in the modern world do we insist on being minimalist on the menu. one event I was at had a menu which read something like this: baked cod, butter sauce with peas, plain boiled rice and mixed veg. When I looked into the serving dishes the cod was sitting there with peas but also samphire and some other green stuff and also had some sort of spice in it, the plain boiled rice was also not plain it had mixed hers through it and the mixed veg was more like a ratatouille (which I guess is mixed veg). I asked the man in charge of the food what was in the dishes and he directed me to the menu and said it was written there. Of course I asked where on the menu did it have the added extras that were clearly there but he could not give me an answer but did say several times I could have the plain rice. I wanted to shout that it was not plain rice it had stuff in it!!! That was the event where I didnt get to eat as I asked if there was somewhere close by to grab something to eat but was told no and that was it.

The alternatives. As I said above if your giving an allergy alternative make sure it is suitable. Part of me sometimes thinks maybe I should take them at their word and eat the “safe” alternative that they have provided- however due to the potentially catastrophic effects I never would as I value my life too much. I wouldn’t choose to look like this 4 days after having an allergic reaction.

The guess work. I have had experience of this from servers, waiters, to catering managers. One event I asked the catering manager what was in what on the buffet as it was not clearly labelled and they just sort of waved at a variety of things one being satay chicken- errrr no. I did after that event get a very apologetic email from the person organising the event because they had specified my allergies and I should have had a separate plate prepared. So often though people say you should be ok with this- but should be is not good enough when it comes to allergies. I would prefer someone to say I don’t know but I can see if there is something else or even they don’t know but they don’t have anything else. Just be honest. The same occurred with biscuits at a coffee break when I was told the biscuits were fine for me to eat yet I broke in to one and there were whole nuts in it!!

I think what irritated me to most about all of these events was that I had volunteered to bring my own food but was told no and that my allergies would be catered for yet they were not. I could have been really annoying and made a huge fuss about it but I didnt. However as it happens more and more I am getting really irritated especially as there is so much in the press just now about allergies and people who have died as a result of mislabelled food or unlabelled food.

I also think I have been the invited guest to these events. I am giving up my time to come and speak to sometimes hundreds of people about living with severe asthma and allergies or patient and public involvement, I also travel to the other end of the country yet when it comes to making sure you are fed and watered it really does go by the wayside. After a few of the events I have had emails apologising for the lack of food options etc however it has never been from the caterers who really are the ones to blame. I guess because they got paid their buck they don’t care- I bet if the money was to be withheld they may take more note. Alternatively I could name and shame but I won’t be doing that as prefer education as an option. If it was to happen again with the same caterers then it would be time to step it up.